Home / News / What is the role of different shapes of rubber O-rings?
News
News
Contact Us

What is the role of different shapes of rubber O-rings?

Rubber O-rings are mainly used for static sealing and r […]

Rubber O-rings are mainly used for static sealing and reciprocating sealing. When used for rotary motion sealing, it is limited to low-speed rotary sealing devices.
V-shaped rubber seal: It is a kind of rubber seal for reciprocating movement. The cross-section is V-shaped and is rarely used alone. Generally, it is composed of a pressure ring with a cloth cloth, a support ring and several V-shaped sealing rings. The number of sealing rings depends on the sealing pressure. The V-shaped sealing ring is made of rubber cloth or pure rubber. The rubber material is generally NBR. The pressure ring and the support ring are usually pressed with harder rubber cloth. The support ring can also be pressed with hard plastic. The V-shaped seal assembly is mainly used for piston rods and plungers of heavy equipment. This seal assembly can provide good stability and wear resistance, and can prevent the seal ring from being squeezed into the gap, even under harsh conditions, such as axial or radial vibration, sudden pressure, temperature changes Etc. can still provide the best sealing effect. It is suitable for media such as hydraulic oil, water and emulsion. The operating pressure can reach above 40 MPa, the surface linear velocity is generally 0.5m•s-1, and the operating temperature is -30～120 ℃.
U-shaped rubber sealing ring: It is a kind of rubber seal for reciprocating motion. The cross-section is U-shaped, referred to as U-shaped seal. It is divided into rubber type and cloth type. Generally, cloth type U-type seal is often used in combination with a pure rubber support ring. This type of cloth type U-type seal is mainly used on the piston rod and hydraulic plug of hydraulic cylinder. For hydraulic oil, water and emulsified oil. Because the adhesive tape has a good surface structure, it can maintain good lubrication when sliding on the metal surface, reduce friction and wear, and improve performance. The support ring pre-compresses the lip at low pressure and has a good seal. It has a self-sealing effect at high pressure. . The working oil pressure is generally 25 MPa, the maximum pressure limit is 35 MPa, the linear velocity is 0.5 m•s-1, and the operating temperature is -30 to 120 ℃. The usage conditions of the pure rubber U-shaped seal are almost the same as the Y-shaped seal.
Y-shaped rubber sealing ring is a type of rubber seal used for reciprocating movement. The cross-section is Y-shaped, referred to as "Y-shaped seal". The operating system generally used for hydraulic or pneumatic transmission plays a sealing role in the piston, piston rod and cylinder parts. It can be made of high-hardness nitrile rubber, or molded with polyurethane rubber, or it can be made into a cloth combination type. This kind of product has a simple structure and good sealing effect, and has a self-sealing effect when the pressure increases, but the root of pure rubber products is easy to extrude under high pressure. Generally, the pure rubber Y-seal is suitable for occasions where the oil pressure is less than 16 MPa, the linear velocity is less than 0.5 m•s-1, and the temperature is -30 to 120 ℃.
Multi-lip reciprocating rubber seal: It is a compound rubber seal with more than two sealing lips. There are different cross-sectional structures according to the conditions of use. Mostly composed of NBR and fabric tape layer, the two can be directly molded into one, or they can be separately molded and vulcanized to form a sealing body. The sealing surface is equipped with multiple sealing lips and lubricating oil grooves, which keeps a small amount of lubricating oil on the surface of the sealing lip when working, which reduces friction and heat dissipation. There are generally two plastic retaining rings on the upper and lower sides of the seal during use to prevent the sealing ring from being squeezed into the gap under high pressure. According to different structures, its working pressure is generally 20～40MPa, linear velocity is 0.1～0.2m•s-1, and it can work in hydraulic oil, water and emulsion. 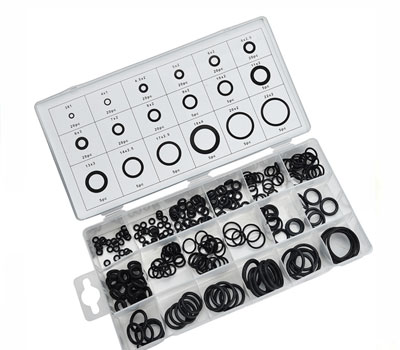 0
PREV: What are the common types of seals and their uses?      NEXT: What are the types and material properties of rubber seal devices?
CONTACT US