Home / News / What are the related introductions of various sealing knowledge?
News
News
Contact Us

What are the related introductions of various sealing knowledge?

Leakage is one of the common failures of mechanical equ […]

Leakage is one of the common failures of mechanical equipment. There are two main reasons for the leakage: one is the result of mechanical processing, the surface of the mechanical product must have various defects and shape and size deviations, therefore, gaps will inevitably occur at the joints of the mechanical parts; the second is the sealing two If there is a pressure difference between the two sides, the working medium will leak through the gap.

Packing sealPacking seals are mainly used for the dynamic sealing of the moving parts of process machines and equipment in the machinery industry, such as centrifugal pumps, compressors, vacuum pumps, mixers, reactor shaft seals and reciprocating pumps, plungers or piston rods of reciprocating compressors, And to make the seal between the valve stem of the linear and spiral motion valve and the fixed body. The basic form of stuffing box is:

(1) Asbestos packing:
Both temperature resistance and corrosion resistance are very good, but when used alone, the sealing effect is not good, so it is always impregnated or added with other materials. Oil-impregnated asbestos packing: There are two basic structural forms, one is twisted and the other is braided. It can be divided into round and square.

(2) Teflon braided packing:
The PTFE tape is woven into packing, which has excellent corrosion resistance and can be used in cryogenic media.

(3) Rubber O-ring:
In the low pressure state, the sealing effect is good. The use temperature is restricted, such as natural rubber can only be used at 60°C.

(4) Plastic molding filler:
It is generally made into a three-piece type, but it can also be made into other shapes. Most of the plastics used are polytetrafluoroethylene, and nylon 66 and nylon 1010 are also used.

(5) Soft packing seal
Soft filler, also known as mud-like filler, is a high-grade "packing" made from a new generation of high-performance synthetic fibers with special barrier agents and lubricants. The soft packing has any size and shape, and it is easy to install. It can be injected directly through a special high-pressure gun. It does not need to be pre-cut like a traditional packing, and it can be applied to any size of the packing cavity.

The soft packing seal has a wide range of applications, such as the sealing of high-pressure reciprocating pumps or low-speed pumps, high-temperature valve stems, valves or stuffing boxes.
It has the advantages of simple structure, reliable operation, low price, etc., and is still widely used in occasions where the requirements are not too high.

Contact dynamic seal
Gasket seal
Sealing gasket is a kind of sealing spare parts used in machinery, equipment, and pipelines as long as there is fluid. It uses internal and external sealing materials.
Sealing gaskets are made of metal or non-metal plate-like materials through cutting, stamping or cutting processes. They are used for sealing connections between pipelines, and sealing connections between parts of machinery and equipment. According to the material, it can be divided into metal gasket and non-metal gasket. There are copper gaskets, stainless steel gaskets, iron gaskets, aluminum gaskets and so on. Non-metallic gaskets include asbestos gaskets, non-asbestos gaskets, paper gaskets, and rubber gaskets. The latest is graphite gaskets.

Thread seal
There are generally two types of thread seals, one is the threaded connection gasket seal, the other is the thread plus filling and economic seal, both of which are used for small diameter threaded connection sealing occasions.
The sealing element of the threaded connection gasket is the gasket, and the thread only serves to provide the pressing force. The effect of sealing is in addition to the performance of the gasket itself. The roughness of the sealing surface and the relative geometric position accuracy of the threaded hole also have a great influence on the sealing effect. Because the sealing gasket not only bears the pressing force when tightening the thread, but also bears the torque, which causes the gasket to deform or even damage. Therefore, when the gasket is non-metallic, it is generally only suitable for occasions where the pressure is not high. For metal, the applicable pressure can reach more than 30Mpa.

Felt ring seal
The felt ring is installed in the trapezoidal groove of the bearing cover, and the felt is pressed against the shaft by the pressure of the side surface of the trapezoidal groove, thereby playing a sealing role. It has good stretchability, good warmth retention, moisture retention and elasticity.
Felt ring oil seals are commonly used in primary and secondary gear reducers. In the bearing end covers of the input shaft and the output shaft, there is a trapezoidal ring groove in the middle of the "contact" with the shaft, and the felt ring is placed in it to prevent dust and prevent leakage of lubricating oil.

Oil seal
The oil seal is the seal of the lubricating oil. It isolates the parts that need to be lubricated in the transmission parts from the output parts, so that the lubricating oil will not leak.
All parts that have liquid lubricating oil in the running body box and are connected to the outside need oil seals. Some are rubber, some are metal, and most are steel-bonded rubber, such as the crankshaft rear oil seal, the front and rear oil seals of the gearbox, the left and right half shaft oil seals, the front oil seal of the final drive, and the air compressor crankshaft oil seal.

Hermetic seal
Fully enclosed seal is to completely isolate the leakage channels inside and outside the system, or to place the working machine (pump) and the prime mover in the same closed system, which can completely prevent the medium from leaking out. Therefore, when it involves highly toxic, radioactive materials and rare In the production of valuable materials, as well as in precision experiments, hermetic sealing is of great significance. The common form is diaphragm seal.
Non-contact dynamic seal

Screw seal
Spiral seal is a form of dynamic seal. It is a spiral groove that is machined on a rotating shaft or on a sleeve of the shaft, and a sealing medium is filled between the shaft and the sleeve.
The rotation of the shaft causes the spiral groove to produce a conveying effect similar to that of a pump, thereby preventing leakage of the sealing liquid. The size of its sealing ability is related to the helix angle, pitch, tooth width, tooth height, the effective length of the tooth and the size of the gap between the shaft and the sleeve.
Since there is no friction between the seals, the service life is long, but due to the limitation of structural space, the spiral length is generally short, so its sealing ability is also limited. When the pump is used at reduced speed, its sealing effect will be greatly reduced.

Centrifugal seal
The centrifugal seal is a device that uses the centrifugal force generated when the added work element rotates to prevent leakage. Its sealing ability comes from the work done by the sealing element driven by the rotation of the machine shaft. There are two main forms of centrifugal seal: back blade seal and auxiliary impeller seal.
Back blade seal and auxiliary impeller seal are commonly used shaft seal devices for centrifugal pumps. These two types of centrifugal seals can use large sealing gaps, have low wear and long life, and can achieve close to zero leakage. They are often used to transport impurity pumps and slurry pumps containing solid-phase media, but the sealing power consumption is large and needs to be configured. Parking seal.

Dry gas seal
Dry gas seal is a new type of shaft end seal that uses slotted sealing technology for gas sealing.
When the moving ring with a fluid dynamic pressure groove on the outside of the end surface rotates, the fluid dynamic pressure groove pumps the high-pressure isolation gas on the outer diameter side (called the upstream side) between the sealing end surfaces, from the outer diameter to the groove diameter. The pressure gradually increases, and the air film pressure gradually decreases from the groove diameter to the inner diameter. The opening force formed by the increase in the end surface film pressure is greater than the closing force acting on the seal ring, and a very thin layer of air is formed between the friction pairs. The membrane thus enables the seal to work in a non-contact state. The formed gas film completely blocks the relatively low pressure sealing medium leakage channel, and realizes zero leakage or zero escape of the sealing medium.

Labyrinth seal
The labyrinth seal is to set a number of circular sealing teeth arranged in sequence around the rotating shaft. A series of interception gaps and expansion cavities are formed between the teeth and the teeth. When the sealed medium passes through the gap of the tortuous labyrinth, it produces a throttling effect to prevent leakage. purpose.
It has the advantages of good sealing performance under high-speed conditions, no need for lubrication, no friction, simple maintenance, long service life, and no need to use other sealing materials; but it has high processing accuracy and is difficult to assemble.

Face seal (mechanical seal)
"End face seal" means that the seal is on the end face and is squeezed and sealed by another plane.
A mechanical seal refers to a device that prevents fluid leakage by keeping at least a pair of end faces perpendicular to the axis of rotation under the action of fluid pressure and the elastic force (or magnetic force) of the compensation mechanism and the cooperation of the auxiliary seal to prevent fluid leakage. The elastic loading mechanism and the auxiliary seal are the mechanical seals of the metallic corrugated tube, which we call the metal bellows seal. In light-duty seals, rubber bellows are also used as auxiliary seals. Rubber bellows have limited elasticity and generally need to be supplemented with springs to meet the loading elasticity. "Mechanical seal" is often referred to as "mechanical seal" for short. 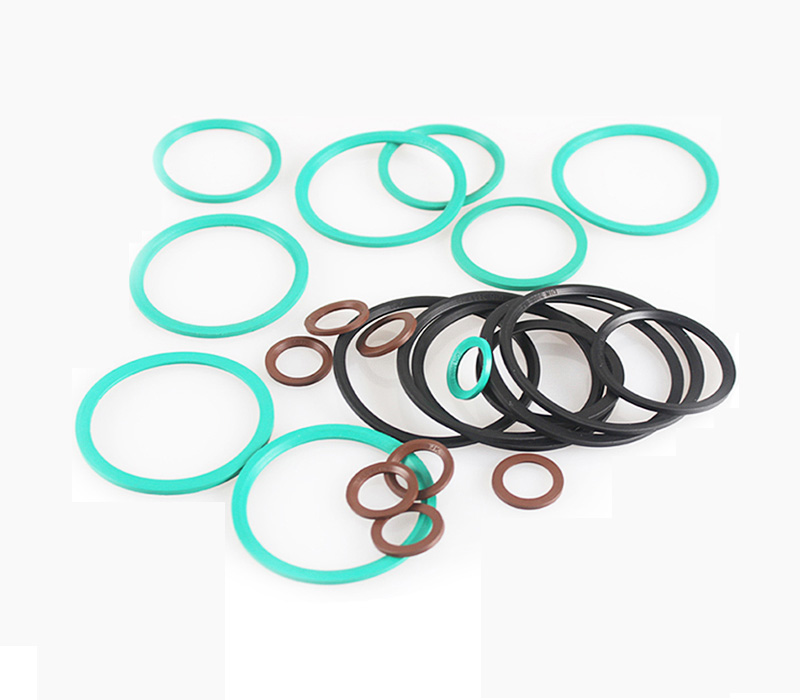